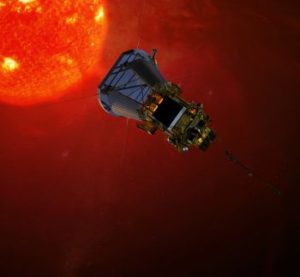 A year from now Calmont Wire & Cable will head for the the Sun.

On July 31, 2018, NASA’s Parker Solar Probe will enter it’s launch window and begin a historic mission to explore the Sun.  Many of it’s systems will be powered with wire and cable designed by Calmont.

According to NASA, the "Parker Solar Probe will swoop to within 4 million miles of the sun’s surface, facing heat and radiation like no spacecraft before it."  The wires we designed for the solar probe can operate in extreme temperature conditions at both ends of the heat spectrum.  Shortly after launch the probe will operate in freezing cold terperatures ranging from -65C to -140C.   It will travel 90 million miles at a rate of 450,000 MPH and, as it approaches the Sun’s superheated corona,  it’s electrical wires will have to function at more the 300C.    Temperature isn’t the only challenge to designing wire and cable for the harsh environment of outerspace.   The absence of gravity can cause materials used to insulate wire and cable to leech gases, a process called "outgasing", which can cause electrical failures and variety of other problems.  Calmont  had to use specialized materials and tight controls during the manufacturing process to produce wires that can function under such extreme conditions.

According to NASA.  The scientific objectives of the Parker Solar Probe are to:

For more information about the probe:  http://parkersolarprobe.jhuapl.edu/index.php#the-mission

To contact a Calmont Engineer about designing custom wire and cable for your project:  https://www.calmont.com/contact/contact-form/